These insects characteristically have large rounded heads covered mostly by well-developed, compound eyes, legs that facilitate catching prey (other insects) in flight, two pairs of long, transparent wings that move independently, and elongated abdomens. They have two ocelli and short antennae. The mouthparts are on the underside of the head and include simple chewing mandibles in the adult.

The nymphs have stockier, shorter, bodies than the adults. In addition to lacking wings, their eyes are smaller, their antennae longer, and their heads are less mobile than in the adult. Their mouthparts are modified, with the labium being adapted into a unique prehensile organ for grasping prey. Damselfly nymphs breathe through external gills on the abdomen, while dragonfly nymphs respire through an organ in their rectum.

Although generally fairly similar, dragonflies differ from damselflies in several, easily recognizable traits. Dragonflies are strong fliers with fairly robust bodies and at rest hold their wings either out to the side or out and downward (or even somewhat forward). Damselflies tend to be less robust, even rather weak appearing in flight, and when at rest most species hold their wings folded back over the abdomen (see photograph below, left). Dragonfly eyes occupy much of the animal's head, touching (or nearly touching) each other across the face. In damselflies, there is typically a gap between the eyes.

Eggs are laid in water or on vegetation near water or wet places, and hatch to produce pronymphs which live off the nutrients that were in the egg. They then develop into instars with approximately 9–14 molts that are (in most species) voracious predators on other aquatic organisms, including small fishes. The nymphs grow and molt, usually in dusk or dawn, into the flying teneral immature adults, whose color is not yet developed. These insects later transform into reproductive adults. 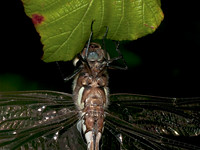 Dragonflies are valuable predators that eat mosquitoes, and other small insects like flies, bees, ants, and very rarely butterflies. They are usually found around lakes, ponds, streams and wetlands because their larvae, known as "nymphs", are aquatic.

Female dragonflies lay eggs in or near water, often on floating or emergent plants. When laying eggs, some species will submerge themselves completely in order to lay their eggs on a good surface. The eggs then hatch into nymphs. Most of a dragonfly's life is spent in the nymph form, beneath the water's surface, using extendable jaws to catch other invertebrates (often mosquito larvae) or even vertebrates such as tadpoles and fish

The larval stage of large dragonflies may last as long as five years. In smaller species, this stage may last between two months and three years. When the larva is ready to metamorphose into an adult, it climbs up a reed or other emergent plant. Exposure to air causes the larva to begin breathing. The skin splits at a weak spot behind the head and the adult dragonfly crawls out of its old larval skin, pumps up its wings, and flies off to feed on midges and flies 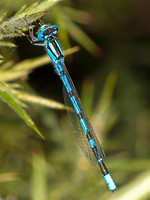 Nymphs are carnivorous, feeding on daphnia, mosquito larvae, and various other small aquatic organisms, using extendable jaws similar to those of the dragonfly nymph. The gills of damselfly nymphs are large and external, resembling three fins at the end of the abdomen.

After moulting several times, the winged adult emerges and eats flies, mosquitoes, and other small insects.