Traditionally, all the raptors are grouped into four families in this single order. However, in Europe, it has become common to split the order into two: the falcons and caracaras remain in the order Falconiformes (about 60 species in 4 groups), and the remaining 220-odd species (including the Accipitridae – eagles, hawks, and many others) are put in the separate order Accipitriformes.

Falconiformes, like Accipitriformes, typically have a sharply hooked beak with a cere (soft mass) on the proximodorsal surface, housing the nostrils. Their wings are long and fairly broad, suitable for soaring flight, with the outer 4–6 primaries emarginated.

The Falconidae is one of the two major families within the order Falconiformes. The family is divided into two subfamiles, Polyborinae, which includes the caracaras and forest falcons, and Falconinae, the falcons, kestrels and falconets.

Falcons and caracaras are carnivores, feeding on birds, small mammals, reptiles, insects and carrion. In popular imagination the falconids are fast flying predators, and while this is true of the genus Falco and some falconets other species, particularly the caracaras are more sedentary in their feeding. 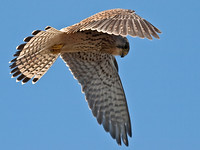 Falconinae are a Sub Family of Falconidae.

Adult falcons have thin tapered wings, which enable them to fly at high speed and to change direction rapidly. Fledgling falcons, in their first year of flying, have longer flight feathers.This makes it easier to fly while learning the exceptional skills required to be effective hunters as adults.

As is the case with many birds of prey, falcons have exceptional powers of vision; one species has a visual acuity of 2.6 times that of a normal human.