A passerine is a bird of the order Passeriformes, which includes more than half of all bird species. Sometimes known as perching birds or, less accurately, as songbirds, the passerines form one of the most diverse terrestrial vertebrate orders: with over 5,000 identified species, it is roughly twice as species rich as the largest of the mammal orders, the Rodentia. 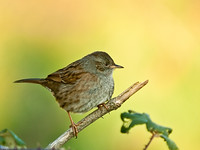 These are in the Sub Order Passeri

The Accentor shares features of sparrows, warblers and small thrushes. In the UK there is only one species, the Dunnock (Prunella modularis.

The Dunnock is often confused with the sparrow (it is sometimes called a hedge sparrow) but the sharp pointed beak is a dead giveaway. If disturbed, the bird will fly at low level, straight into the thickest bush it can find. Unusually, these birds form mating trios in the breeding season. Either 2 males and a female or 2 females and a male.

They nest in thick shrub or low down in conifers. Their main food source are insects.These birds do not migrate and can be seen all the year round in the UK. 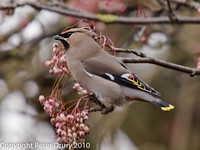 These are in the Sub Order Passeri

Waxwings are characterised by soft silky plumage.They have unique red tips to some of the wing feathers where the shafts extend beyond the barbs; in the Bohemian and Cedar Waxwings, these tips look like sealing wax, and give the group its common name. The legs are short and strong, and the wings are pointed. The male and female have the same plumage. All three species have mainly brown plumage, a black line through the eye and black under the chin, a square-ended tail with a red or yellow tip, and a pointed crest. The bill, eyes, and feet are dark.

Their main food is fruit, which they pick from late summer though winter. In the spring, their diet changes to sap, buds and flowers. They also eat insects when these are abundant.

They breed and are normally resident in Northern Europe. They are not normally long-distance migrants but they sporadically move South and west in search of food in the winter. It is on these occasions that they might be seen in the UK. 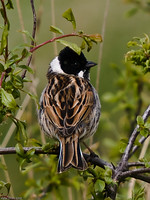 These are a group of Eurasian and African birds.They look very similar to a Finch but have slimmer bodies. The bill has has a characteristic thin upper mandible fitting onto a thicker lower mandible which has a curved cutting edge. The tails are dark with a broad white edge except for the Corn Bunting where the tail is plainer.

These birds are sead eating with habits similar to Finches. 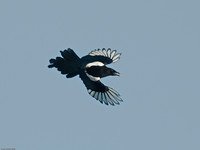 Medium to large, heavily built Paserines. They are quick to learn and can often be seen raiding litter bins, even those with lids requiring skill to access. Jackdaw and Ravens are very skilled fliers, often seen in aerial combat, whilst Magpies and Jays only have short fluttering flights.

They are sociable and often seen in flocks. They will eat almost anything, vegetable or animal matter. 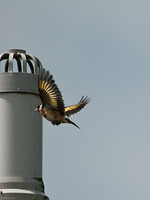 A large group of relatively small Paserines.They have a powerful and undulating flight, They feed on seeds and insects.

They are sociable and often seen in flocks. 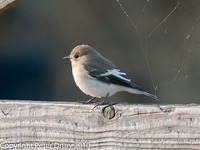 Muscicapidae is a large family of small passerine birds restricted to the Old World. These are mainly small arboreal insectivores, many of which, as the name implies, take their prey on the wing.. 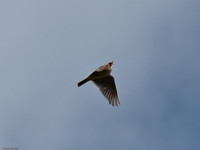 Larks are small to medium-sized passerine birds. They have more elaborate calls than most birds, and often extravagant songs given in display flight. With these song flights, males defend their breeding territories and attract mates. Most species build nests on the ground, usually cups of dead grass, but in some species more complicated and partly domed. 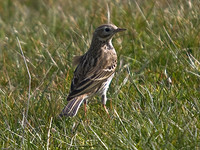 Motacillidae are a family of small passerine birds with medium to long tails. The longclaws are entirely restricted to the Afrotropics (only included here for completeness). Wagtails are predominately found in Europe, Africa and Asia. Pipits have a wider distribution, being found across mostly in the Old World but occurring also in the Americas and oceanic islands such as New Zealand and the Falklands.

They have long, pale legs with long toes and claws, particularly the hind toe. Most motacillids are ground-feeding insectivores. They occupy almost all available habitats, from the shore to high mountains. Wagtails prefer wetter habitats to the pipits. 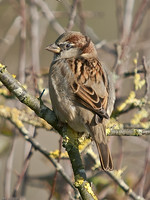 Generally, sparrows tend to be small, plump brown-grey birds with short tails and stubby, powerful beaks. The differences between sparrow species can be subtle. They are primarily seed-eaters, though they also consume small insects. A few species scavenge for food around cities and, like gulls or pigeons, will happily eat virtually anything in small quantities.

The Old World true sparrows are indigenous to Europe, Africa and Asia. In Australia and the Americas, early settlers imported some species which quickly naturalised, particularly in urban and degraded areas. House Sparrows, for example, are now found throughout North America, in every state of Australia except Western Australia, and over much of the heavily populated parts of South America. 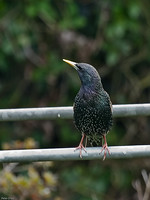 Starlings are small to medium-sized passerine birds in the family Sturnidae. Starlings have strong feet, their flight is strong and direct, and they are very gregarious. Their preferred habitat is fairly open country, and they eat insects and fruit.

Starlings have diverse and complex vocalizations, and have been known to embed sounds from their surroundings into their own calls, including car alarms, and human speech patterns. The birds can recognize particular individuals by their calls, and are currently the subject of research into the evolution of human language. 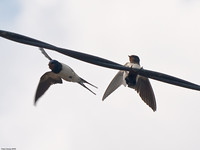 The swallows and martins are a group of passerine birds in the family Hirundinidae which are characterised by their adaptation to aerial feeding. Swallow is used colloquially in Europe as a synonym for the Barn Swallow.

Their body shape allows for very efficient flight, which costs 50-75% less for swallows than equivalent passerines of the same size. Swallows usually forage at around 30–40 km/h, although they are capable of reaching speeds of between 50–65 km/h when traveling.

Lots more information can be found on Wikipedia. 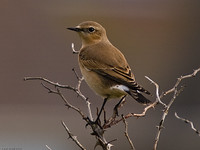 They are insectivorous, but most species also eat worms, snails, and fruit. Many species are permanently resident in warm climes, while others migrate to higher latitudes during summer, often over considerable distances. 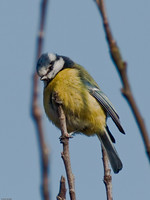 The tits, chickadees, and titmice constitute Paridae, a large family of small passerine birds which occur in the northern hemisphere and Africa.

These birds are mainly small stocky woodland species with short stout bills. Some have crests. They range in length from 10 to 22 centimetres. They are adaptable birds, with a mixed diet including seeds and insects. They are hole-nesting birds, typically using trees, although some species build nests on the ground. They lay anything from three to nineteen speckled white eggs, depending on species. 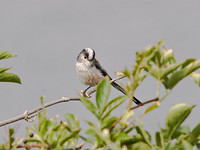 All the Aegithalidae are forest birds, particularly forest edge and understory habitats. They are small birds, measuring 9–14 cm (3.5–5.5 in) in length, including the relatively long tail, and weighing just 4.5–9 g (0.16–0.32 oz). Their plumage is typically dull grey or brown, although some species have white markings and the Long-tailed Tit has some pinkish colour.

They are omnivorous, primarily eating insects and other invertebrates.[4] Plant material is taken occasionally during the winter. The family generally forages in arboreally, usually in the shrub layer or canopy, and seldom visits the ground. Prey is generally glean from branches, leaves and buds, more rarely is it taken in the air. 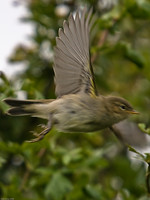 The Sylviidae mainly occur as breeding species, as the name implies, in Europe, Asia and, to a lesser extent Africa. However, most birds of temperate regions are strongly migratory, and winter in the latter continent or tropical Asia. Many are accomplished songbirds, though perhaps not as much as other warblers or some thrushes.

The majority of species are monogamous and build simple, cup-shaped nests in dense vegetation. They lay between two and six eggs per clutch, depending on species. Both parents typically help in raising the young, which are able to fly at around two weeks of age. 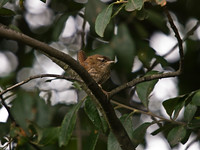 There are about 80 species of true wrens in about 20 genera. The genus eponymous of the family is Troglodytes. Only one species of Troglodytes occurs in the Old World, where in Anglophone regions it is commonly known simply as the "wren" as it is the originator of the name; it is called the Winter Wren in North America.

Wrens are mainly small and inconspicuous, except for their loud and often complex songs. These birds have short wings and they cannot see at night. Several species often hold their tails upright and sleep on the ground. Wrens are insectivorous, eating insects and spiders but they will also eat fish, small rodents and lizards. 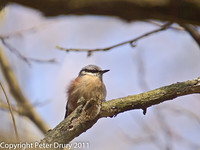 Nuthatches are all in the single genus Sitta. Their name is derived from the placing of insects and seed into a crevice to hack at the food with their strong bills.

Nuthatches are compact birds with short legs, compressed wings, and square 12-feathered tails. They have long, sturdy, pointed bills and strong toes with long claws. Nuthatches have blue-grey backs (violet-blue in some Asian species, which also have red or yellow bills) and white underparts, which are variably tinted with buff, orange, rufous or lilac. Although head markings vary between species, a long black eye stripe, with contrasting white supercilium, dark forehead and blackish cap is common. 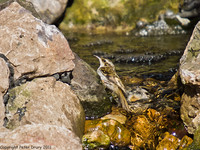 The treecreepers are a family, Certhiidae, of small passerine birds, widespread in wooded regions of the Northern Hemisphere and sub-Saharan Africa. The family contains ten species in two genera, Certhia and Salpornis. Their plumage is dull-coloured, and as their name implies, they climb over the surface of trees in search of food

More information can be found on Wikipedia