This is a gallery of our pets (and those of our friends, that we look after). 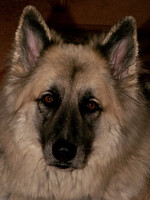 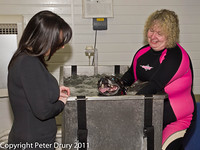 Molly had an operation on her left rear leg joint in the summer and has had to rest for several months until the repair was strong enough for her to exert herself.

She was given the go-ahead to start building her strength up in December. By then, she had lost about 1" of muscle on the affected leg.

The vet referred her to this organisation and she gets hydro therapy evry 4/5 days. It is obviously doing a lot of good as she is now walking on all four legs most of the time. Before that, she would hop around on three